No one wants to think worst case scenario but it is something that should always be considered when venturing outdoors. Whether hunting, camping, or just hiking you should always consider the what if and be prepared with a plan  who can I call, where can I run to for help? No one enjoys the thought of having to defend yourself with an armed response, which should always be a last resort, but an armed response is something you should be prepared to execute if the situation arises.

As responsible gun owners, it’s our duty to be more informed and prepared than the average person. Carrying a firearm is a responsibility that should not be taken lightly  training to hit a target is just the tip of the proverbial iceberg. Colonel Jeff Cooper, the founder of Gunsite Academy, developed the Combat Triad that consists of Weapons Handling, Marksmanship and most importantly, MINDSET. You can be the best shooter in the world but if you can’t perform when your life is in danger the outcome could be anything from hurting yourself, injuring others, or becoming a fatality. Keeping all of this in mind, before you venture out on your next outdoor excursion ask yourself, should I carry?

Should I Carry A Firearm Camping?

Whether RV camping or a taking a week-long backpacking trip, the short answer is yes! Firearms are arguably the best option to protect yourself from potential threats. Threats can come in the form of bears, bull moose, mountain lions and honey badgers okay, the Honey Badger may be a stretch but you get the point basically, you never know what to expect. The only thing you should expect is the unexpected. Or in other words, be prepared and have a plan for if the SHTF!

You don’t want your last words to be I should have brought my gun or I wish I would have trained more. Prepare means exactly that. In team sports, you practice plays so you can execute on the field. Firearms training is no different and the stakes are much higher. You owe it to yourself and those around you to be as educated as possible. We all have the right to keep and bear arms and we should take the time to master our tools. First and foremost, take a minute to learn the rules and laws of the state you will be camping in or traveling through. With many popular camping destinations residing in National Parks, it’s good to brush up on what you can and can’t do. This is all part of the preparation.

In 2010 Congress approved a new law allowing loaded firearms in National Parks. That means people can openly carry legal handguns, rifles, shotguns, and other firearms, and also may carry concealed guns as allowed by state statute. The National Parks Service has created a Quick Guide so you can review all regulations before you head out. Check it out: https://www.nps.gov/grca/learn/management/upload/Firearms-in-IMRparks2-2010.pdf What threats exist?
Understanding potential threats is another important part of defending yourself and your family. Mindset, Mindset, MINDSET! Threats will vary depending on location and time of year. For example, in the springtime, bears are coming out of hibernation, breeding and loading up on food for the upcoming fall and winter. Crossing a mama bear with cubs can be a downright scary ordeal or in rare instances fatal. Have a plan and if you don’t know what to do consult with the park rangers or locals to get knowledge. Avoidance is always the best option, get educated on where you are going.

Are you camping during hunting season?
If yes, this should be obvious  wear bright-colored clothes! Fluorescent colors will help keep you and others in your camping party safe from hunting accidents.

Are you camping during peak animal seasons?
This may seem silly, but it’s worth considering. Male moose (bull moose) are most aggressive during mating season (usually fall) and your presence might be interpreted as competition for females. In addition, female moose attacks occur more often in spring to protect their offspring. So really, it’s best to avoid moose in the fall and spring. And always.

How scary is a charging moose?
Trust me when I say it is terrifying. The writer of this blog has personally been chased by a male moose during mating season. Lucky for me, I was able to make it to my car before the moose got to me. One thing I learned an angry moose is fast! A charging moose can reach up to 35 MPH, which is way faster than I can run, despite what I may have told my kids. Even the fastest Olympian tops out at 28 MPH. Even though they look kind of cuddly, moose attack more people than bears, so don’t hold on to that notion and keep your distance. What animal is most likely to attack you?
Check out this awesome state-by-state may to find out: Man vs Beast

Protected animals
It is also very wise to learn if certain animals are protected. In Utah you cannot shoot rattlesnakes, small birds, songbirds, or any other animal listed on an endangered list. The endangered list is subject to change at all times. Keep an eye on it.

On another note, rattlesnakes will not aggressively attack you so you shouldn’t have the necessity to shoot one, and I’ve yet to encounter an aggressive songbird. Seems obvious, right? Just be responsible and use common sense!

What bullet can best protect against threats?
Understanding realistic threats will help you build your loadout. Don’t face a Grizzly with a .22, unless you’re this guy. And don’t try that at home, camping, trail running, or anywhere.

What caliber will protect you from a bear attack?
According to an article published by our friends at The Truth About Guns, here is what you would need:

Here are some other popular caliber rounds with generalized characteristics:

How much ammo should I bring?
Whatever caliber you choose, bring at least 50 rounds. Have your second magazine completely loaded and accessible. Remember to plan ahead  ammo is heavy!

What are good firearm options?
There are many, many options available. When making this decision, get to your local range and test-fire the guns you are considering. A personal favorite for 9mm (get ready for a shameless plug) is the SilencerCo Maxim 9. With the suppressor already built in, you have a fully integrated, no-hassle, quiet, light weight, and hearing safe 9mm. The best gun to use is the one you can shoot well and operate without hesitation. Reference weapons handling in the combat triad.

Should your gun have a round chambered?
To best address this question, check out this video made by our friends over at FourGuysGuns. https://youtu.be/sL0g0ON2aP8 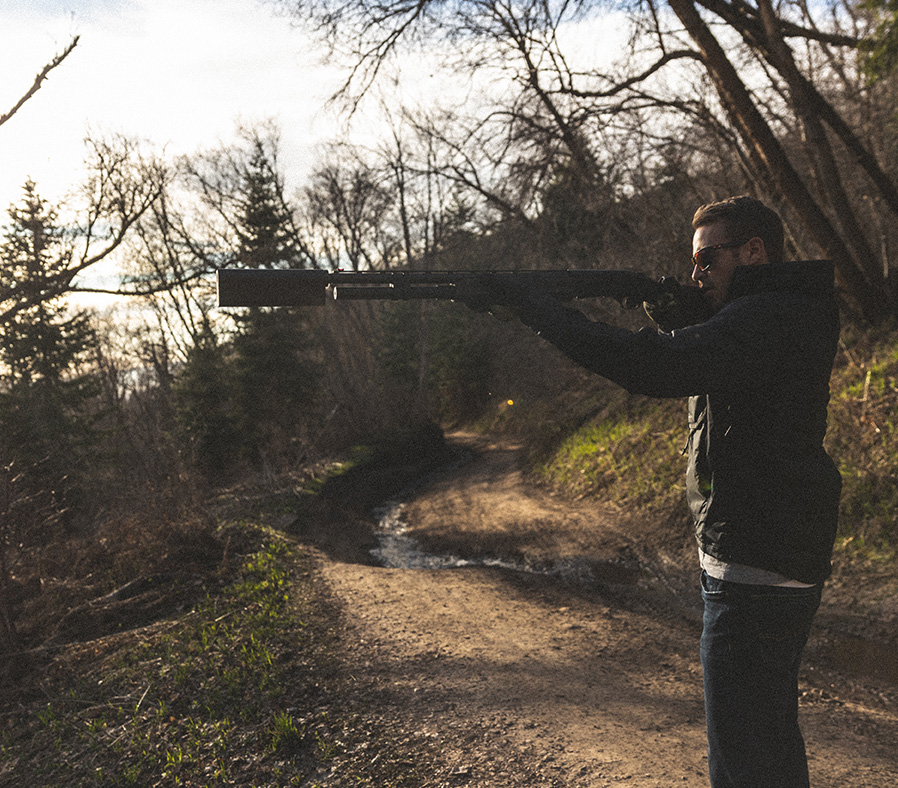 Where should I holster/keep/carry my firearm?
You can holster the firearm wherever it’s most comfortable. Do a little research on outside the waistband (OTW) vs inside the waistband (ITW) holsters, shoulder holsters, and ankle holsters. Also, check out this article on the top 13 carry options. https://www.usacarry.com/13-concealed-carry-handgun-methods/
Gunfighters Inc. manufactures a very nice kydex chest rig that fits most common calibers. The chest rig is great for when wearing a pack and helps keep your firearm accessible.

Should I have my firearm holstered all the time?
Regardless of where you choose to carry your gun, you should have a holster and always use it. A good holster will cover the trigger and help prevent accidental discharge of the firearm. Keep it somewhere preferably locked where you can easily access it. Most importantly, do all you can do to ensure children cannot access it. Remember, out of sight, out of mind is a real thing. There is no need to show off your gun to anyone especially a child. Teach your kids how to handle a firearm safely but keep it in a holster until it’s time to use it or clean it.

As a secondary precaution, ensure all children in the area know the proper steps to take when encountering a firearm. The NRA has great resources for helping your children learn gun safety. If you choose to take your child shooting, guarantee they know the four gun rules, and never let them handle firearms alone.

What kind of holster is best?
There are many holster options out there. Ultimately your decision will be based on where you want to carry/keep your firearm and comfort. When choosing between leather and kydex (tough plastic), remember that leather will stretch and lose shape with time and use.

What if I have to defend myself and kill an animal in the process?
If you shoot an animal, contact your local wildlife fish and game division immediately.

Ultimately, your underlying responsibility is to be prepared, and to be a responsible gun owner. Remind yourself of the combat triad and apply those principles. Train like your life depends on it, because it does!